For more than 200 years, local markets have been a gathering place in urban neighborhoods. For immigrants and refugees, markets offer a place to socialize, catch up on local and national news and hear gossip from back home, speak in a native language, and purchase familiar foods.

Before the automobile and refrigeration were widely available, people shopped within blocks of home, stopping at the butcher shop, the bakery, and the variety food market. Technology and transportation have changed how people shop and socialize, but markets remain essential to many immigrant communities.

The stories of markets established by immigrants and refugees embody timeless values of hard work, resourcefulness, resilience, and commitment to family and community. 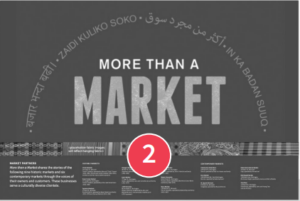 More than a Market shares the stories of the following nine historic markets and six contemporary markets through the voices of their owners and customers. These businesses serve a culturally diverse clientele.

The Markets of Burlington and Winooski, Vermont

Since the 1980s, Vietnamese, Bosnian, Bhutanese Nepali, Iraqi, Congolese, Ghanaian, Somali, and other immigrants have continued this entrepreneurial tradition—some in the same neighborhoods, others in surrounding towns. They offer staples, spices, seafood, halal products, tropical fruits and vegetables, and grains important to the many cultures in the area. They are also a magnet for the growing number of people who enjoy cooking global cuisine.