Friendships forged within neighborhood markets spilled out into the community beyond. Baseball and bocce, picnics and parties – market families hosted activities that drew generations and cultures together and provided the all-important food.

The Lebanese community in Burlington was tight knit, connected not just by culture but also by ancestral roots. Many arrived from the same mountain villages and found the lush Green Mountains a comforting reminder of home. Some men traveled back to Lebanon and returned with wives. Such was the case of George D. “Georgie” George and Isabelle Faddoul, owners of George’s Market at 38 Pearl Street.

There were formal clubs like the Ladies of Mount Lebanon, but visiting was the favored way to socialize. For the first generation, this was a chance to spend time with those of shared language and culture. George’s Market was a welcoming place for the Lebanese community. Georgie George hosted potluck suppers, providing the meat kababs at the center of the meal.

Potlucks at the Market

Located a stone’s throw from the Lakeside park, Danis’s Cash Market was the physical and social center of the community. Here neighbors purchased the cuts of meat central to French-Canadian cuisine and stocked up on refreshments before heading over to watch baseball games in the park. Over the years, a hall on the second floor served the community as a school, a church, and an event space.

The second-story hall of the store was a regular gathering space for the community. Billiard hall, youth center, special event space—it welcomed all generations. During the week and in summertime, a Danis family member managed an informal youth center, where kids gathered to play the jukebox, dance, and watch movies.

For a time, it was the location of the St. John’s Club, a social and fraternal organization established in Lakeside in 1910. The Club was a chapter of the Union Saint-Jean-Baptiste, a benefit society founded in 1899 to protect the welfare of Franco-Americans.

The Gentlemen on the Fence

Baseball was a favorite pastime in Lakeside. On summer nights, porches overflowed with spectators as the Lakeside 9, a team organized by the Queen City Cotton Company, played against local teams sponsored by businesses like the American Woolen Mills in Winooski and the Wells-Richardson Company in Burlington.

The Izzo family’s hospitality extended beyond the store to picnics at the beach in good weather or to the family bocce court in inclement weather. Picnics on Sunday afternoons at Sand Bar State Park with extended family and friends were a tradition. After serving the after-Mass customers, they closed the store around 1:00 p.m. and headed to the beach in the Champlain Islands north of Burlington.

Izzo’s Market supplied Chianti and cigars for bocce games at Frank Bossi’s Cement Products in South Burlington. Owned by Francesca (Chicky) Izzo’s in-laws, the factory had a professional bocce court in the back with a clay surface and sideboards. Games offered a chance to see friends and family who lived outside the neighborhood and a special treat for the children to ride the conveyor belts.

A Proprietor and Politician 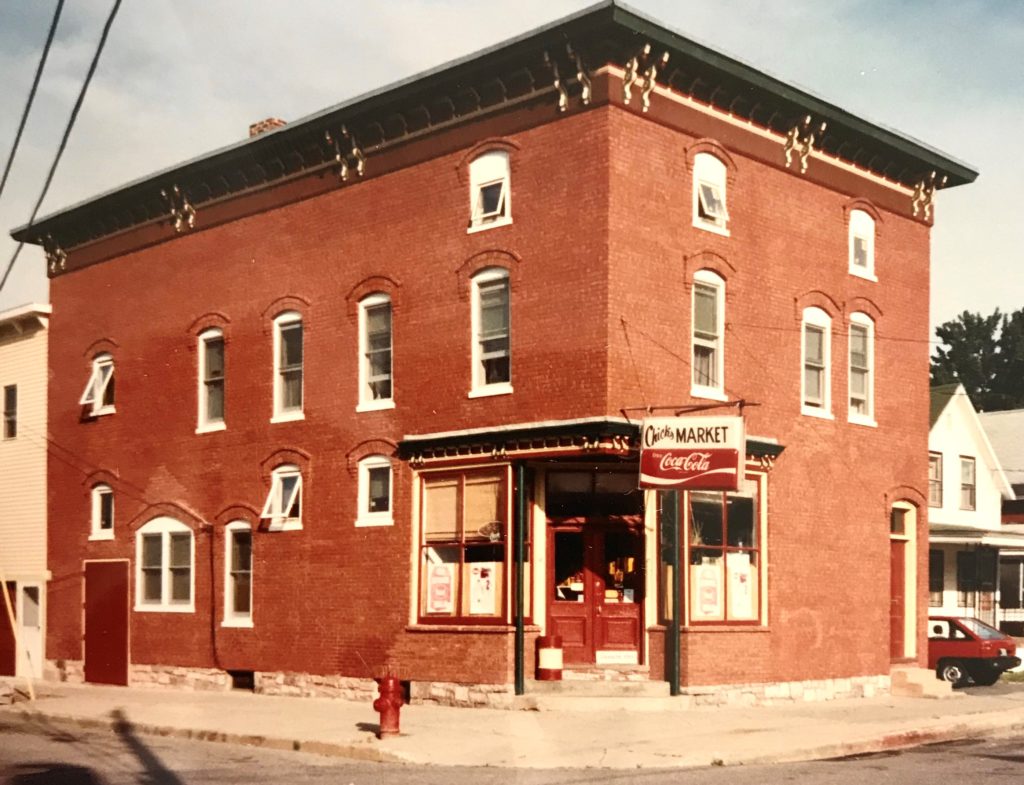 Chick’s Market was the place people came for “a smile and a story” and the best grinders in town. As mayor of Winooski from 1963 to 1969, Edmund G. “Chick” Dupont juggled customer and constituent care from behind the cash register.

Chick was honest, pragmatic, and charismatic, qualities that served him well as a businessman and politician. Constrained by long hours at the market, he conducted city and Democratic Party business from the store.

All day, he listened to the questions and concerns of his constituent customers. His politics, rooted in traditional French Canadian values of family, church, and community, emphasized public participation and transparency in government.

Sewer and street projects, fire protection, health insurance for city employees—Chick tended to the typical business of small city government. In his last term as mayor in the late 1960s, he was instrumental in the inclusion of Winooski in the Model Cities Program, which funneled federal funds to the city for social programs and renewal of deteriorating neighborhood buildings and infrastructure.

John and Mildred McLaurin, owners of J & M Groceries, fought for racial and social justice in the broader community.  Mildred McLaurin was active in the Burlington chapter of the NAACP, established in 1962. John McLaurin advocated for affordable housing in the Old North End of Burlington.

Like NAACP chapters nationwide, the Burlington chapter worked to inspire Black political activism and engagement and carried out national initiatives, lobbying, and publicity at the local level. In addition to member meetings and social events, the chapter sponsored speakers working at the regional and national levels for racial justice. The chapter focused on housing discrimination.

Mildred included her children in meetings and events as a way to build their self-confidence and pride. She helped organize dances, speakers, and fashion shows in which her daughters Judy and Carolyn modeled.