Burlington and Winooski markets in the first half of the twentieth century considered the public not only customers but also neighbors and friends. Shopping at these markets was not just a business transaction but also an opportunity to share the joys and challenges of daily life. In addition to providing a welcoming space for trading news and goods, local markets frequently offered credit and free delivery to customers.

Many customers credited store founder Louis Izzo with carrying local families through the Great Depression. Not only neighbors, but also hobos who gathered in Battery Park, benefited from his generosity. Family lore tells of one hobo, Lucky, who years later returned from California to repay the store. Louis Izzo’s sons continued to offer credit to those in need.

Kieslich’s Market offered a free, daily delivery service for customers. Prior to telephones, the delivery person—usually a Kieslich family member—would stop at a customer’s home to pick up a list, returning that evening or the next day with the goods. No one was exempt from doing deliveries. Owner John V. “JV” Kieslich’s three sons, Albert, Arthur, and John F. made local deliveries on foot in the neighborhood, often anticipating what regular customers needed. 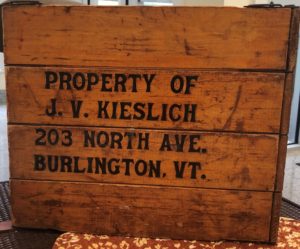 For deliveries farther afield, JV hired drivers to deliver by horse-drawn wagon.  Customers expected the deliveryman to put the groceries in their iceboxes and on their pantry shelves. Phone orders and a truck streamlined service in the 1920s.  In the early years, clerks packed the groceries in collapsible wood boxes with the Kieslich Market name stamped on the side. 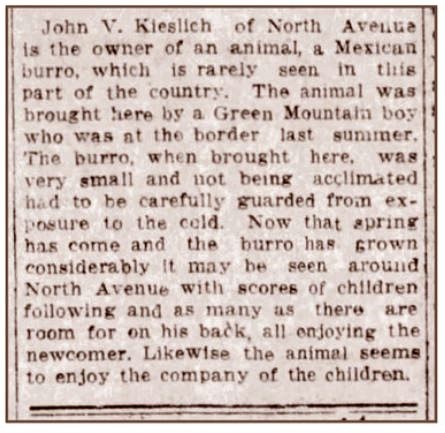 When Vermont’s Tenth Cavalry returned from pursuing revolutionary general Pancho Villa in Mexico, they brought with them a burro as mascot. John Kieslich won the burro in a raffle at the German Club. “Burro” sometimes made deliveries—when he felt like it.

Like many stores at the time, Kieslich’s Market offered credit to customers who lived paycheck to paycheck and worked with them to pay off their balance. The family knew which neighbors were struggling and saved the ends of cold deli meat, called “bologna ends,” for the children.