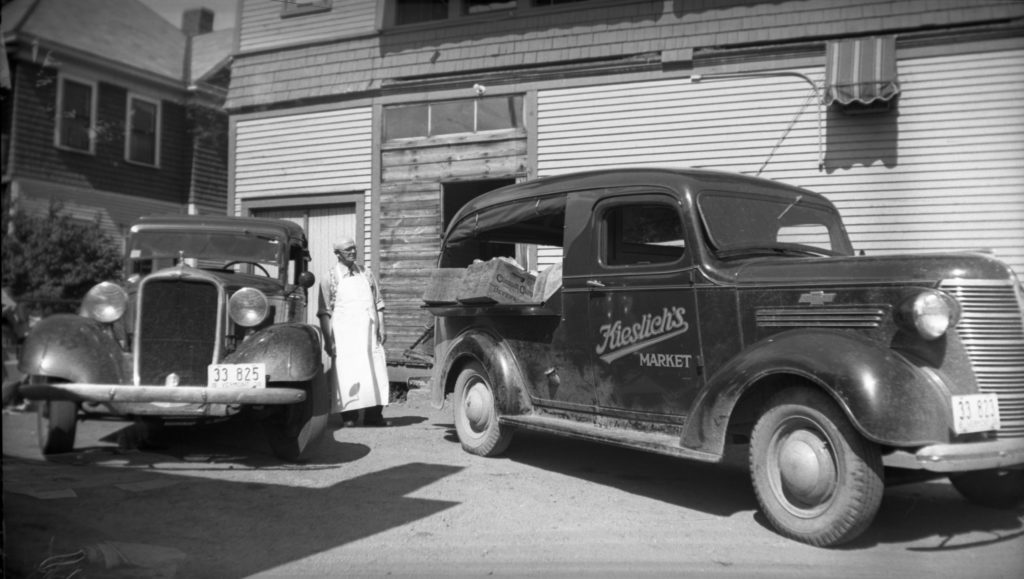 The Kieslichs were a prominent family of craftsmen and contractors in Burlington’s thriving German community of the late nineteenth and early twentieth centuries. So how did John Vincent “JV” Kieslich end up as a market proprietor? Perhaps it was his early work in local food businesses, first as a  chef at the Hotel Burlington and Van Ness Hotel, and then as a clerk at the Burlington Fish Company. In 1911, he opened a small grocery store at 18 Ward Street, the beginning of fifty years of feeding the community.

In the 1880s and 1890s, many German families left an uncertain future in Chancellor Otto von Bismarck’s unified Germany to join family in Burlington. Many put their skills in the building trades to work in a rapidly growing city. JV’s father, Robert, and his extended family arrived in 1883 and established a solid reputation as masons and plasterers.  Robert’s brother, Albert, and partner Alfred Heininger established the Kieslich Construction Company in 1915. The company constructed numerous public buildings and private residences in the city and state.

German families settled north of the city center along North Avenue and side streets, creating a close-knit community that also included French Canadian, Irish, and Jewish families.  At the heart of the neighborhood on Crowley Street, residents built the Goethe or German Club, where the men would gather to drink beer and socialize. The club held picnics in summer for all members, dances, dinners, and holiday celebrations. Children eagerly awaited the Christmas party, featuring German songs and dances and a visit from Santa Claus.

In 1914, JV opened a much larger market at 203 North Avenue with a spacious apartment on the second floor for his family—wife Marie and sons Albert J., Arthur, and John F.

North Avenue, at the time, was on the outskirts of the city, with farmland stretching for miles north. From this location, the market served a loyal clientele that included not just the surrounding German community and wealthy people on “the Hill,” but seasonal visitors vacationing along Lake Champlain’s shores to the north.  Rosenberg’s Market and Saiger’s  Department Store (later, Colodny’s Public Market), both Jewish-owned, were only doors away on North Avenue.

Family and work life merged at Kieslich’s Market. JV’s three adult sons clerked in the market into the 1950s and beyond, and his grandchildren had responsibilities, as well.

In 1960, Albert assumed ownership of the store following JV’s death. His son Dick worked by his side until the business was sold in 1983. 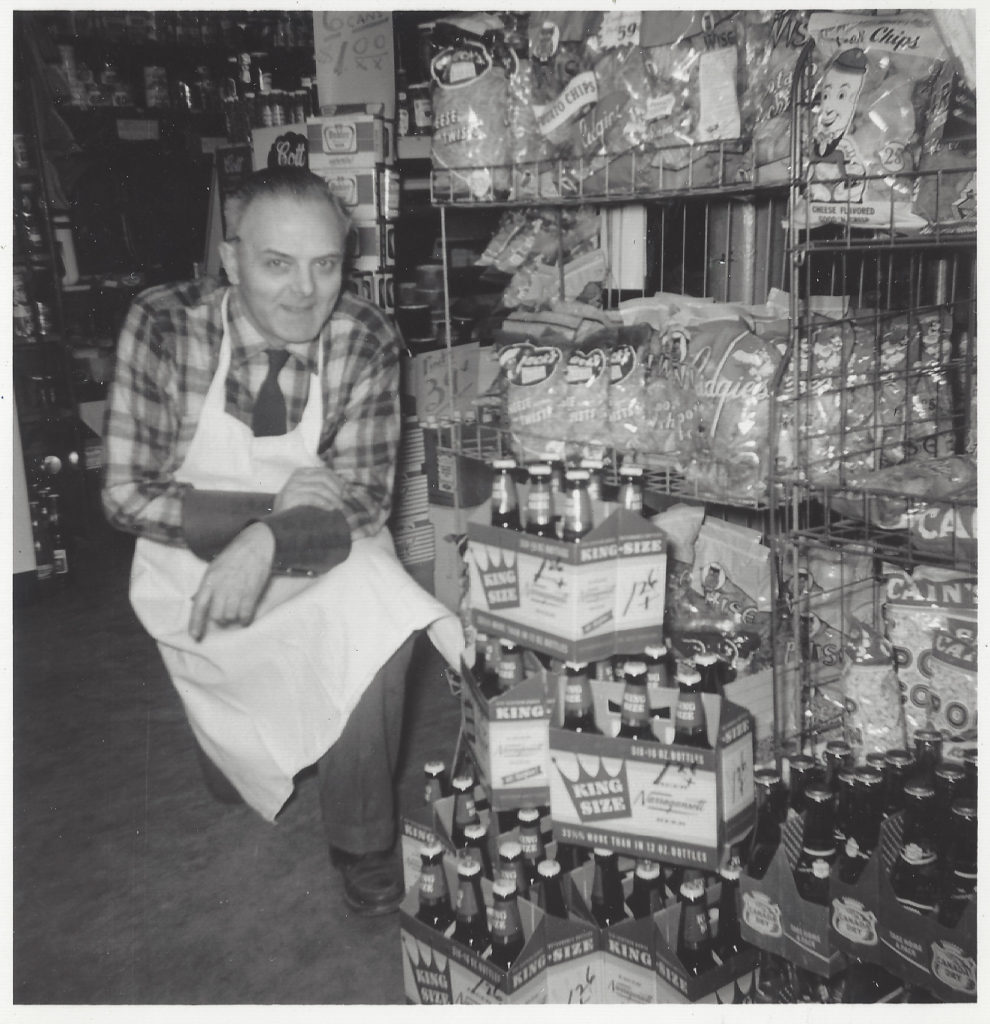 Eggs, vegetables, fruit, poultry, fish, dairy—Kieslich’s Market supported local farmers and food enterprises. Ice fishermen brought in smelt and perch to sell in winter, and local people provided honey and maple syrup for sale. Sister Marie Kieslich, Albert’s daughter, likens the network of local vegetable and dairy farmers, bakeries, and wholesale fruit and beverage companies to an extended family that “put it all together.” Even Gordon Paquette, mayor of Burlington from 1971 to 1981, delivered bread from Fassetts Bakery to the market. 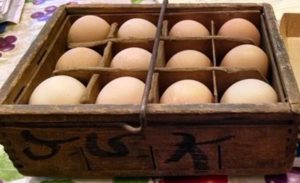 In the early years, Kieslich’s Market sold chickens from a coop in the backyard. Albert’s son Dick remembers collecting eggs in a large bowl that sat on the counter. Customers would carry their eggs home in a wooden box, which they returned to the store on their next visit. Potatoes and onions, purchased from a wholesaler, were delivered to the basement by chute, where the kids would bag them. Marie’s main job was sorting bottles for redemption, while her brothers worked in the store.

Oysters delivered from Massachusetts were stored in a large container on the front porch. People would scoop out what they wanted into Chinese-style takeout containers.

But we all had a sense of ownership because, well, you never came home from school with your report card without going to show it to Grandpa. And there were those kinds of family things that brought us into the store. And you just got to know people. —Sister Marie Kieslich, granddaughter of founder

As other markets shifted to self-serve, the Kieslich family offereda mix of self-serve and personal service. Clerks retrieved dairy products from wooden cooler compartments behind the counter and used a grabber pole to pluck cans and boxes from shelves that lined the walls from floor to ceiling. Into the 1940s, the store sold flour, sugar, oats, chicken feed, and even cookies in bulk from bins.

(Below) Albert Kieslich, c. 1970, slicing a sample of cheese. Large blocks of store cheese, usually a sharp cheddar, were ubiquitous on many market counters. Courtesy of Alfred Holden. 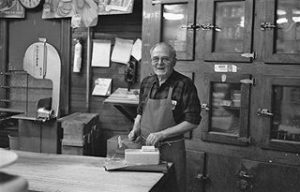 Like many stores at the time, Kieslich’s Market offered credit to customers who lived paycheck to paycheck and worked with them to pay off their balance. The family knew which neighbors were struggling and saved the ends of cold deli meat, called “bologna ends,” for the children.

The market offered an extensive free delivery service for customers. Prior to telephones, the delivery person—usually a Kieslich—would stop at customers’ homes to pick up a list, returning that evening or the next day with the goods. No family member was exempt from doing deliveries; Albert and his brothers did local deliveries on foot in the neighborhood, often anticipating what regular customers needed. For deliveries farther afield, JV hired drivers to deliver by horse-drawn wagon. In the early years, clerks packed the groceries in collapsible wood boxes with the Kieslich Market name stamped on the side. Customers expected the deliveryman to put the groceries in their iceboxes and on their pantry shelves. Phone orders and a truck streamlined service in the 1920s. 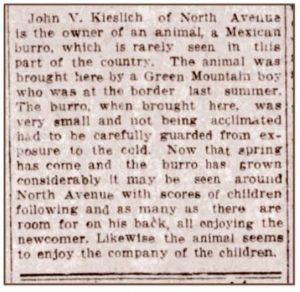 When Vermont’s Tenth Cavalry returned from pursuing revolutionary general Pancho Villa in Mexico, they brought with them a burro as mascot. John Kieslich won the burro in a raffle at the German Club. “Burro” sometimes made deliveries, when he felt like it.

Albert Kieslich gave free expression to his creativity when designing weekly fliers. Printed on colored paper, they featured one of the market’s mottos at the top and whimsical drawings interspersed with weekly specials.  Meat specials occupied close to half of each flier, with local products and national brands the rest.

Kieslich’s Market was known for its vast selection of meat. Homemade sausage, head cheese, and corned beef headlined a dizzying array of cuts of beef, pork, veal, and lamb. Summer visitors would stock up on meats before heading home at the end of the season.