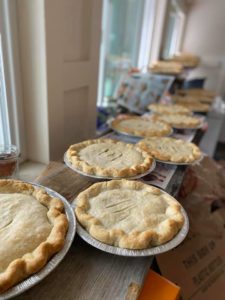 Donat had a central role in feeding the neighborhood, where meat was a mainstay of traditional French Canadian meals. He cleaned the meat from pig’s heads for head cheese, a jellied cold cut; made boudin, or blood sausage; and ground the meat for tourtieres, a meat pie, and the ever popular hamburger. During hunting season, he dressed the venison for customers. In winter, his wife Beatrice made tourtieres to sell in the store.

Making Tourtieres for the Holidays

The second-story hall of the store was a regular gathering space for the community. Billiard hall, youth center, special event space—it welcomed all generations. During the week and in summertime, a Danis family member managed an informal youth center, where kids gathered to play the jukebox, dance, and watch movies.  For a time, it was the location of the St. John’s Club, a social and fraternal organization established in Lakeside in 1910. The club was a chapter of the Union Saint-Jean-Baptiste, a benefit society founded in 1899 to protect the welfare of Franco-Americans.

The Gentlemen on the Fence

Baseball was a favorite pastime in Lakeside. On summer nights, porches overflowed with spectators as the Lakeside 9, a team organized by the Queen City Cotton Company, played against local teams sponsored by businesses like the American Woolen Mills in Winooski and the Wells-Richardson Company in Burlington. Danis men featured prominently on the team rosters for decades.  In 1928 the team played, and lost, a highly anticipated game against Chappie Johnson’s All-Stars of Montreal.

Danis’s Market delivered within the community and issued credit to neighbors struggling financially.