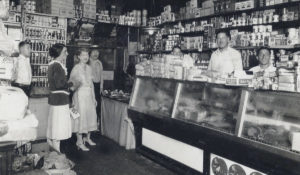 Many customers credited store founder Louis Izzo with carrying local families through the Great Depression. Not only neighbors, but also hobos who gathered in Battery Park, benefited from his generosity. Family lore tells of one hobo, Lucky, who years later returned from California to repay the store. Louis Izzo’s sons continued to offer credit to those in need.